The entrance to our school, which opened in 2009

We are able to support some children going on to secondary education, who are individually sponsored

Our children have access to a daily feeding programme, to keep them healthy

Our children during the weekly school assembly

Our latest project has been to install a well, providing fresh water

Young people from the UK volunteering at our school

A thanking letter read from a standard 8 pupil on behalf of all of the standard 8 class for Carol, Shirley and Jo’s farewell gathering:

First of all, I would like to express great appreciation on behalf of my class.  It says in Chinese “no appreciation is enough for great kindness”, but here, I still want to thank you all for your love and kindness and all the support you are giving us which has provided us with hope and courage to live a better life. If we had not received your support and love we would have lost all our confidence to continue with studies but luckily with your help the difficulties do not affect our studies, but it strengthens our faith to study harder.  People always say that children from poor families take more responsibilities earlier.  We don’t feel lonely when we see you around, instead we sense a great worth of love and continue to study even harder with the help of our beloved teachers and will not disappoint you who have given us support love and hope.  Your kindness means a lot to us – as great as a mountain. The only thing we can do to reward your kindness is to study hard. To all of you kind people here and to your group back in the UK, most of us were all unfortunate orphans before, but now we are happy because we have so many kind people like you for us.  We enjoyed your stay with us and as you prepare to go back to the UK we would like to say thank you and wish you nice people a peaceful and happy life forever.  Through you, God’s love reaches those children who are in need like us.  May God grant you journey mercy.  Forever, we will miss you but look forward to good moments again together.  We love you. 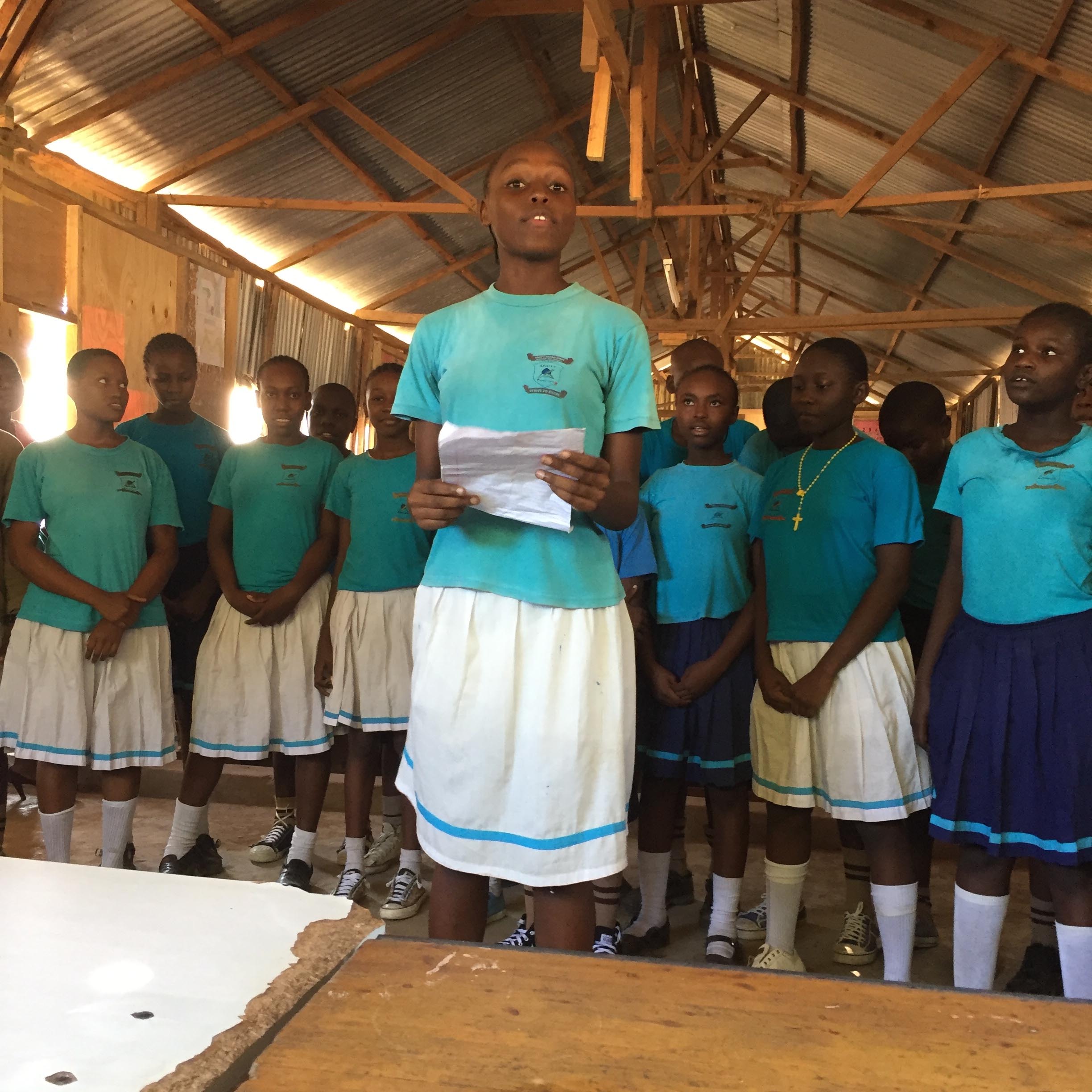 Our school is situated in the heart of Freretown; an area found to the north of Mombasa island, described on the map as “Informal Housing”.  Our school, which opened its doors in 2009, educates and provides a stable, nurturing community for more than 400 children from the surrounding area which includes the much poorer district of Bombolulu.

Unity Freretown Junior and Primary School is much more than a place of learning – we providing a stable, caring environment in which our pupils are given a chance to get a better start in life.

Our school is unique in that it takes under its wing children from very poor families or those without any family at all. Around 60% to 65% of parents are able to meet either all or part of the cost of school fees, the remainder – 35% are supplemented by our charity.

Our supporter’s money helps to pay for  education, gives them access to healthcare and a substantial meal each day they are at school.

We want to make sure that these bright, polite, loving and dedicated young children are given a good education so that they have a chance to improve their life. They so badly want to learn; they are hungry for knowledge; grateful for every opportunity given; and produce amazing results when given the chance.

With your help we really can make a difference – and have been doing so for the last ten years!

When we first built the school it had no mains water supply. In fact, there is no such thing as “Mains Water” in Freretown or Bombolulu. Water is delivered in large yellow containers by hand cart. There are, however, a number of wells and boreholes that access underground water courses.

In 2011 we launched an appeal to dig a well on our property, in line with the sites of two defunct wells. St Andrew’s High, during a visit with 12 students, responded to this and raised £2000 to dig a hole 92feet deep. Three men with picks and shovels worked on this for some weeks until they reached the water supply.
A raised parapet was built and a moveable lid placed over the well but it did not take many buckets of water to realise that lifting a bucket on the end of a rope nearly 30m long was very hard work!

Then the International School from Eindhoven, Netherlands, also made a visit with a number of students and offered to fund an electric pump. At that time we did not have an electricity supply, so the students decided to raise enough money to provide the pump, storage tank, pipework and install electricity cables. In all, about £2000 but also enabling several classrooms to be fitted with electric lights. (Previously they used oil filled lamps in the classrooms after dark).

The well has since been lined with bricks to prevent mud from seeping down the sides and clogging the pump. The well also supplies water for the toilets and, of course, the kitchen. 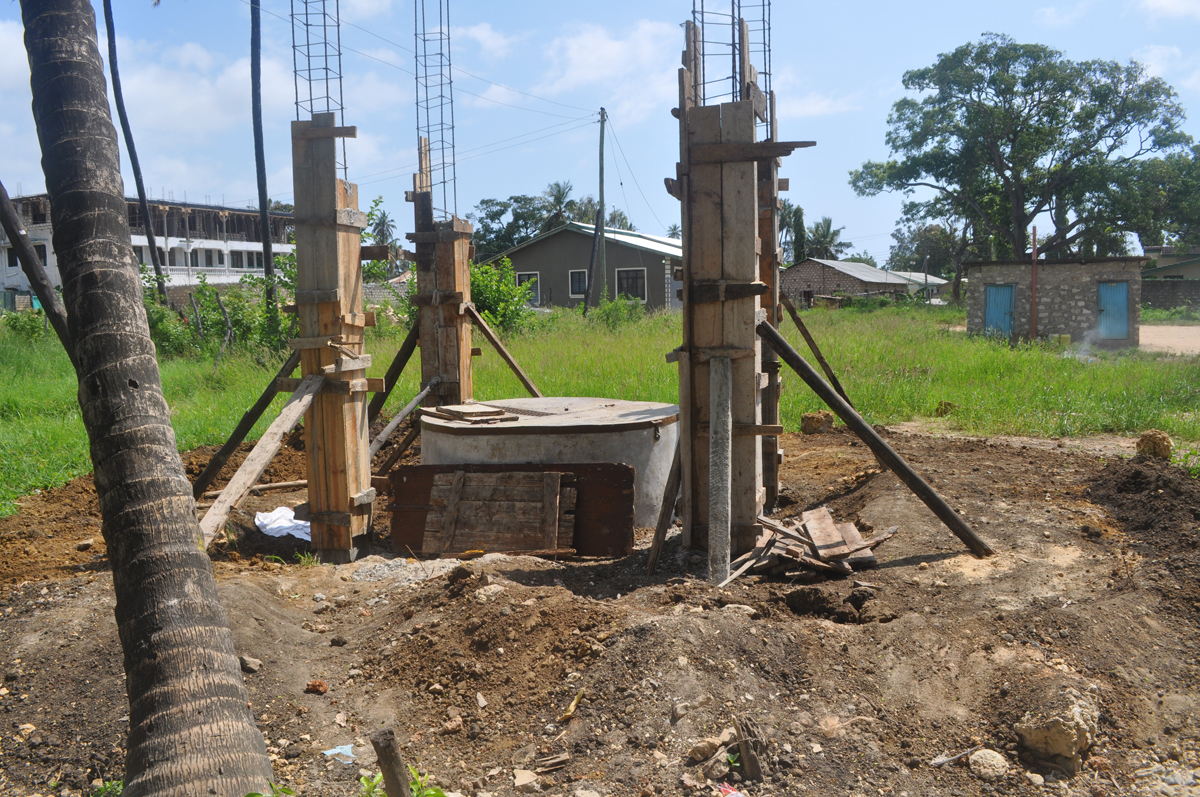 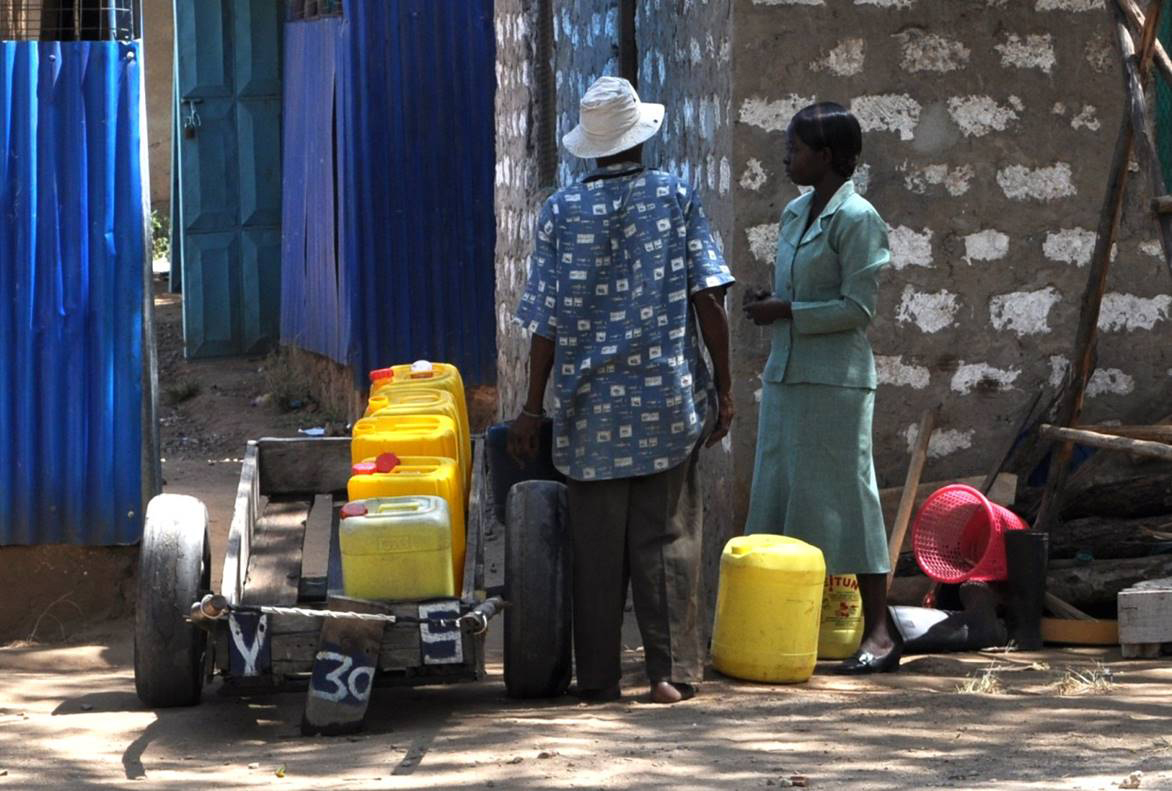 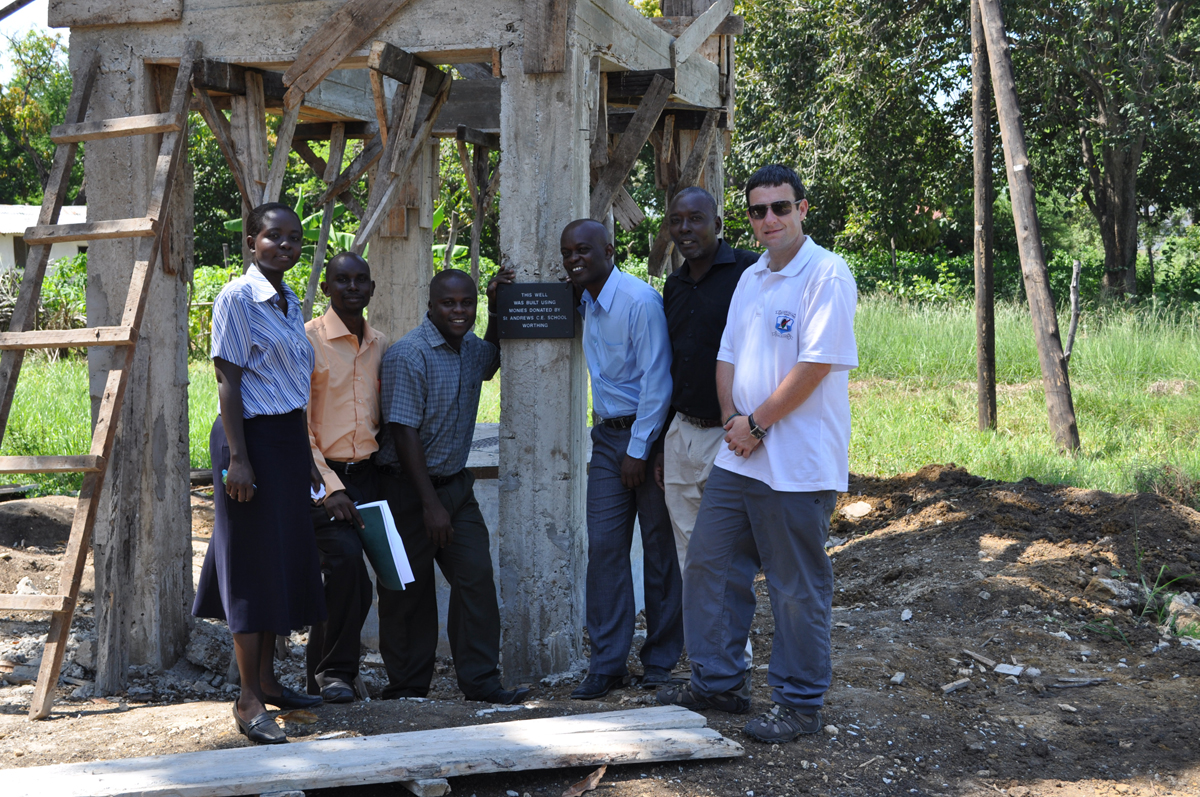 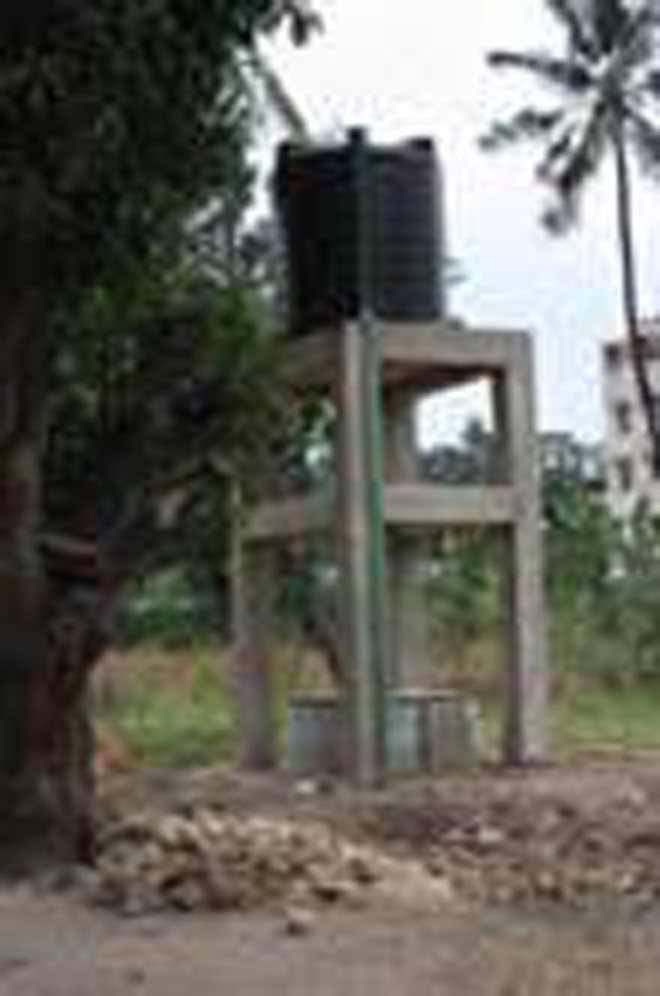 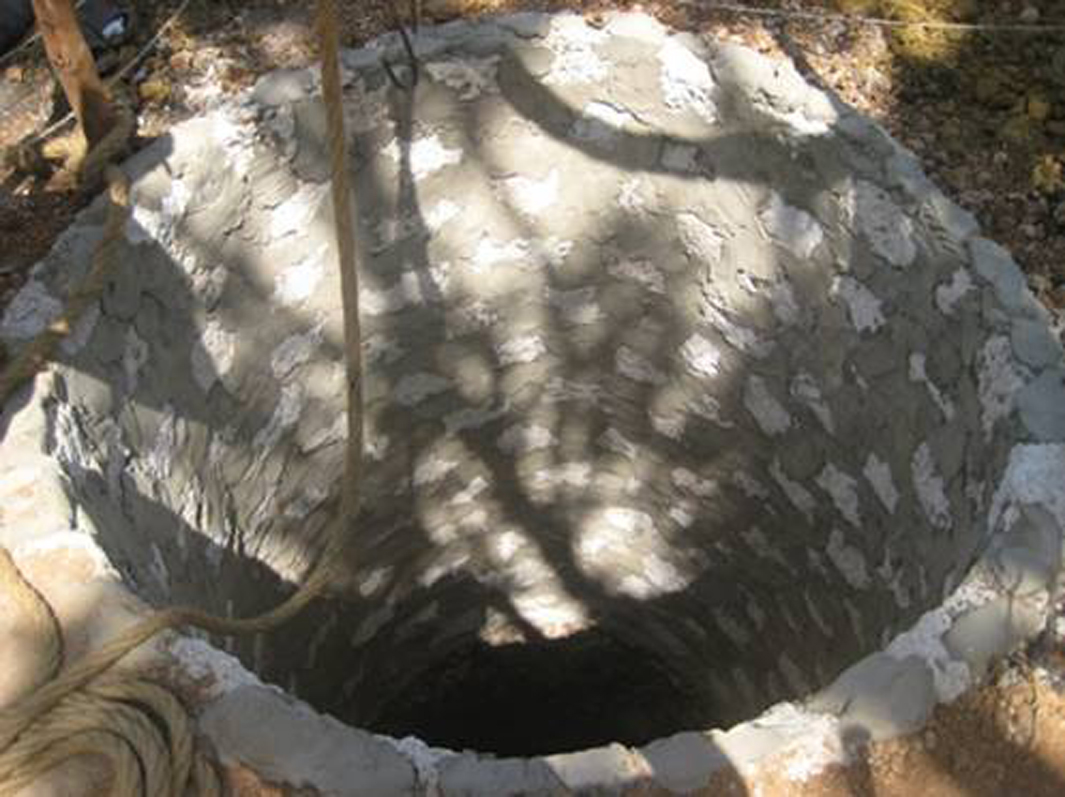 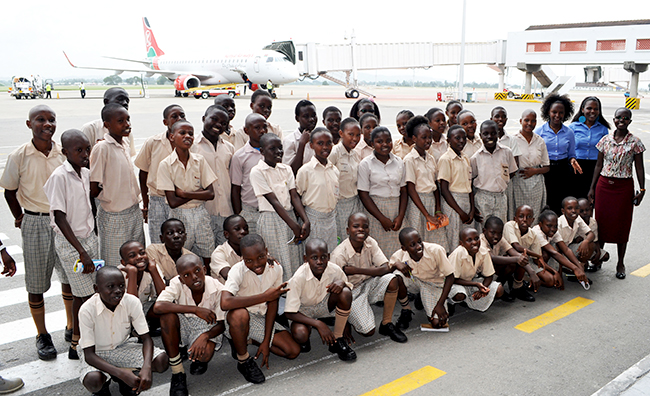 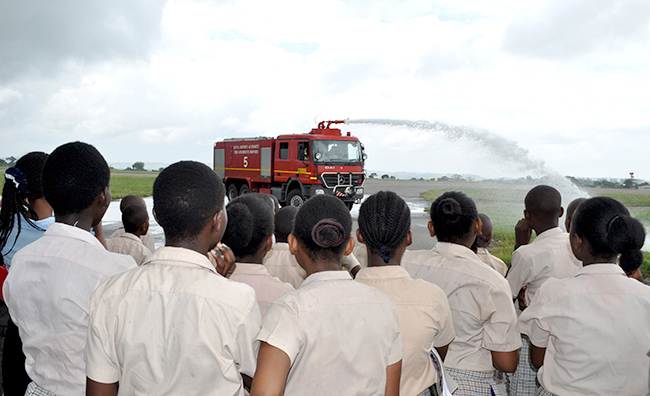 We have recruited qualified teachers to provide teaching to the highest standards. The school is directed by the Charity Trustees who have given responsibility for running the school to a Leadership Team known as “The Summit”. 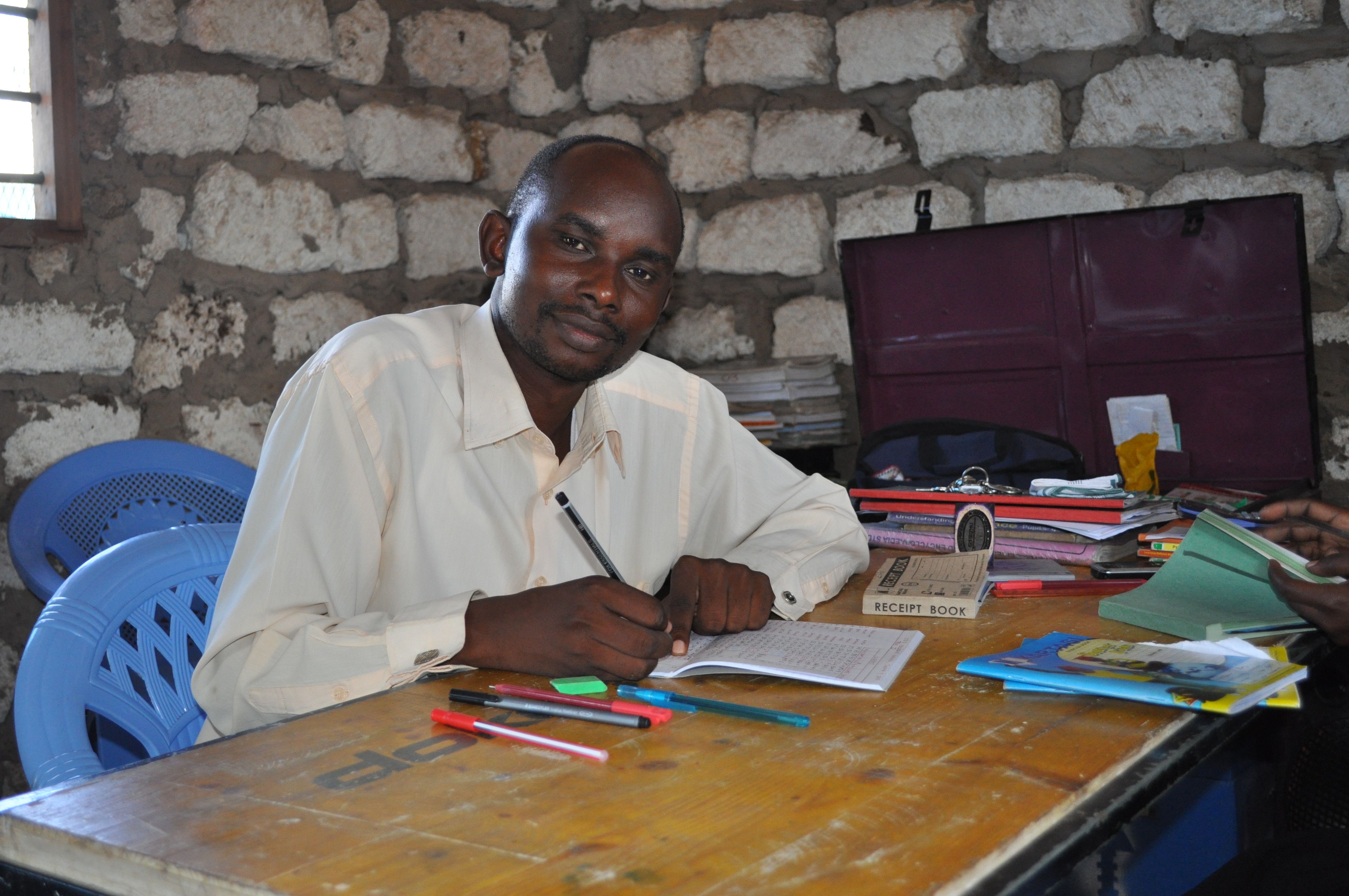 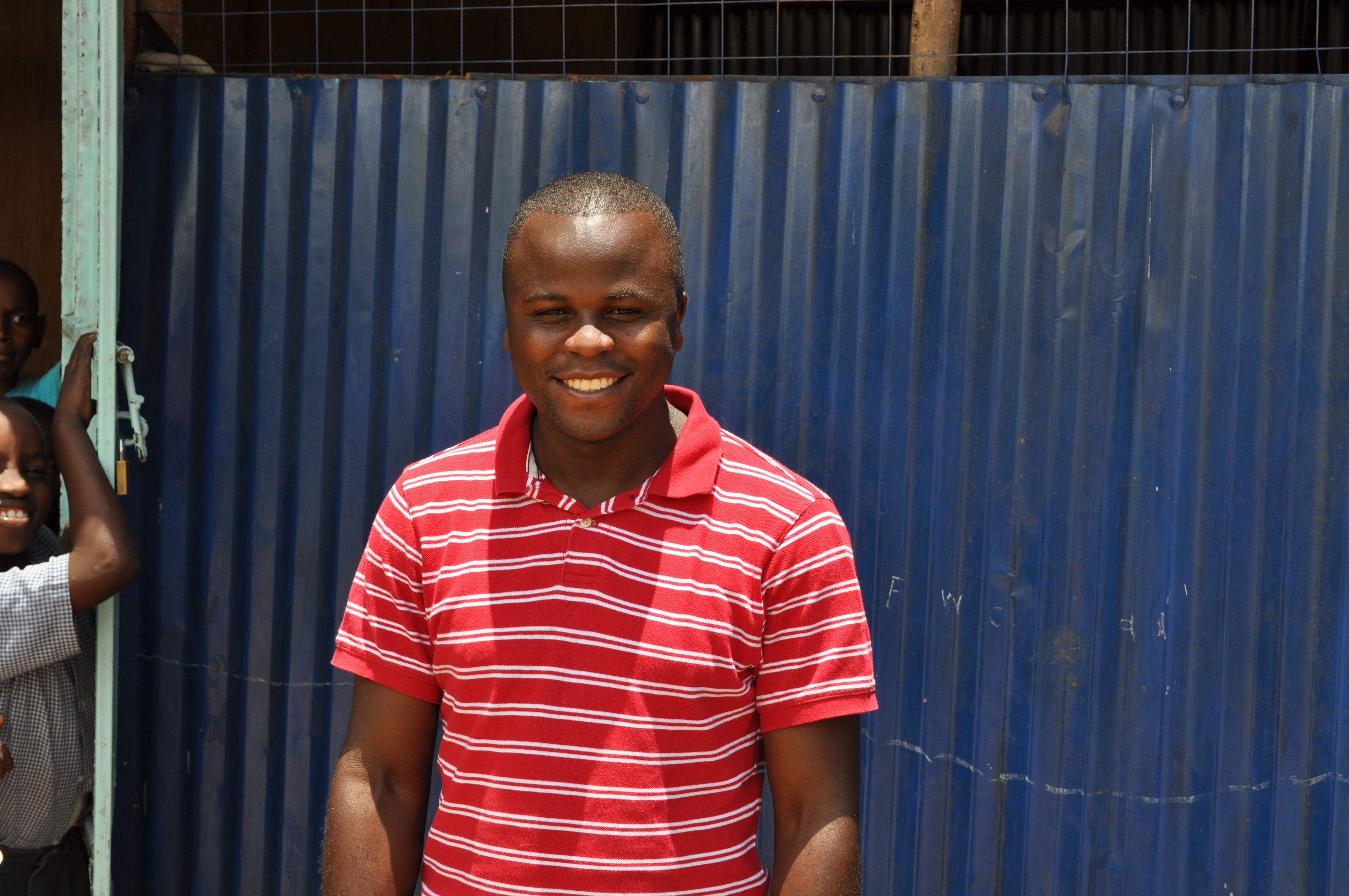 In charge of the Secondary and Higher Education Students 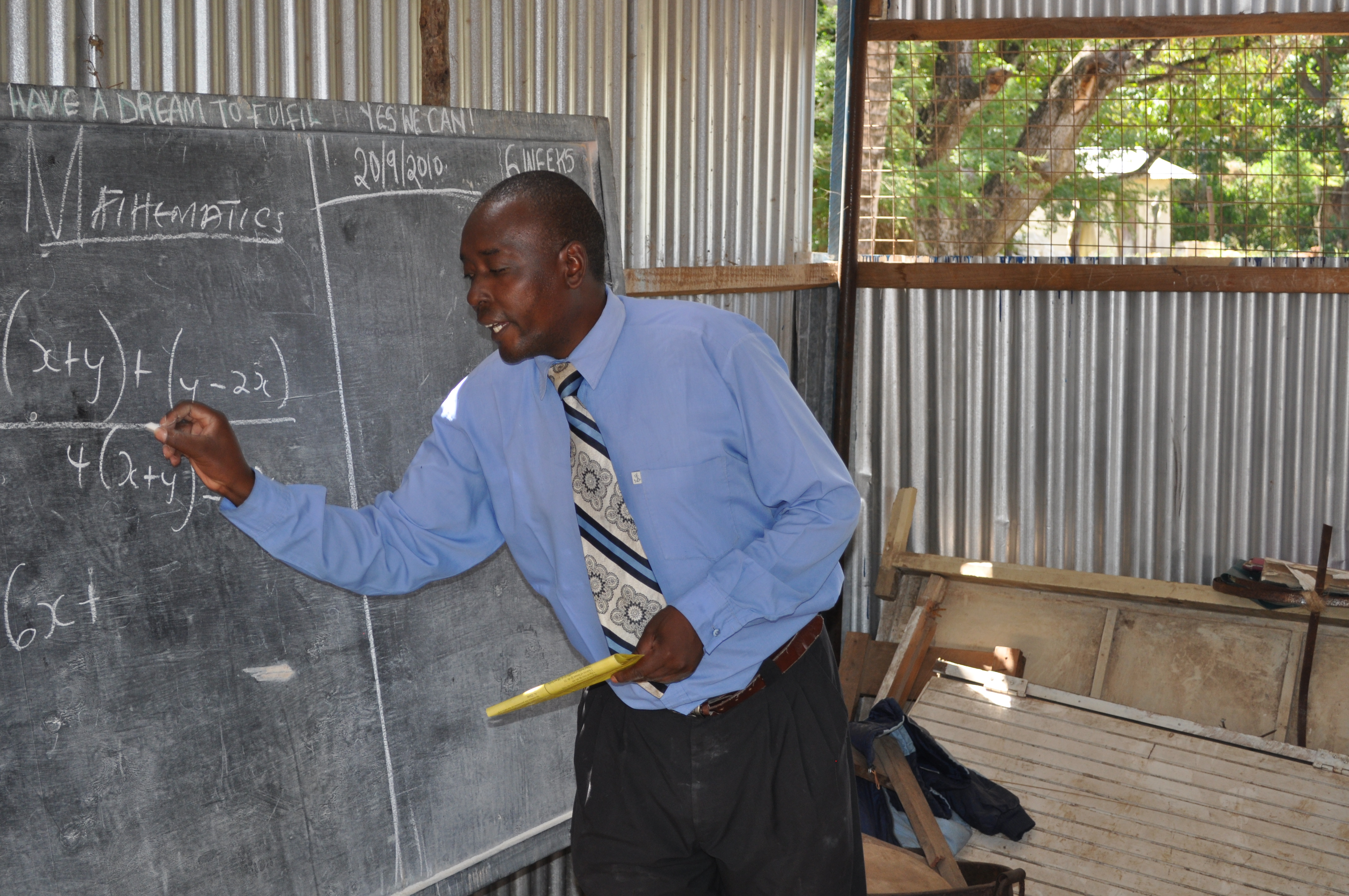 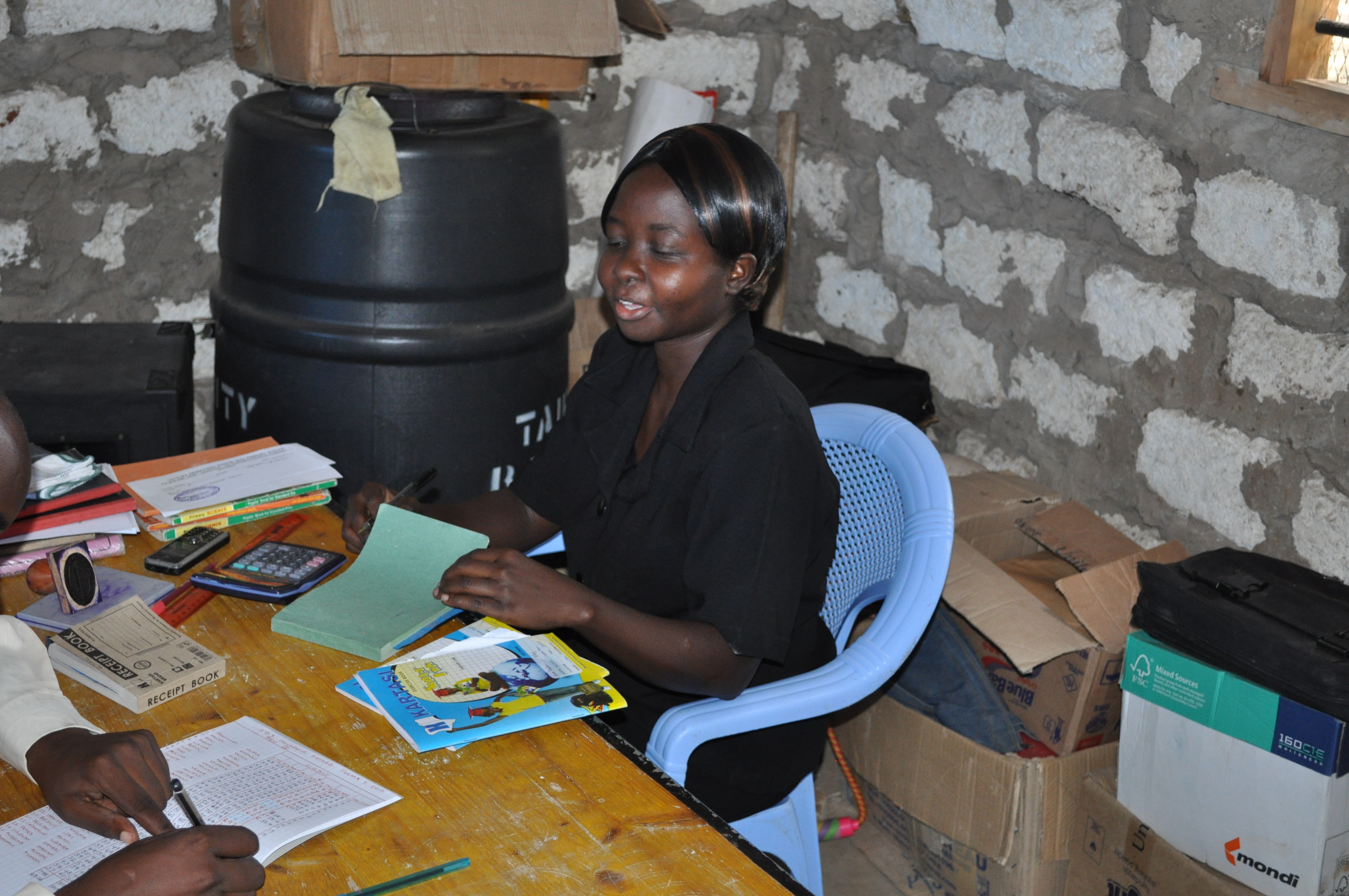 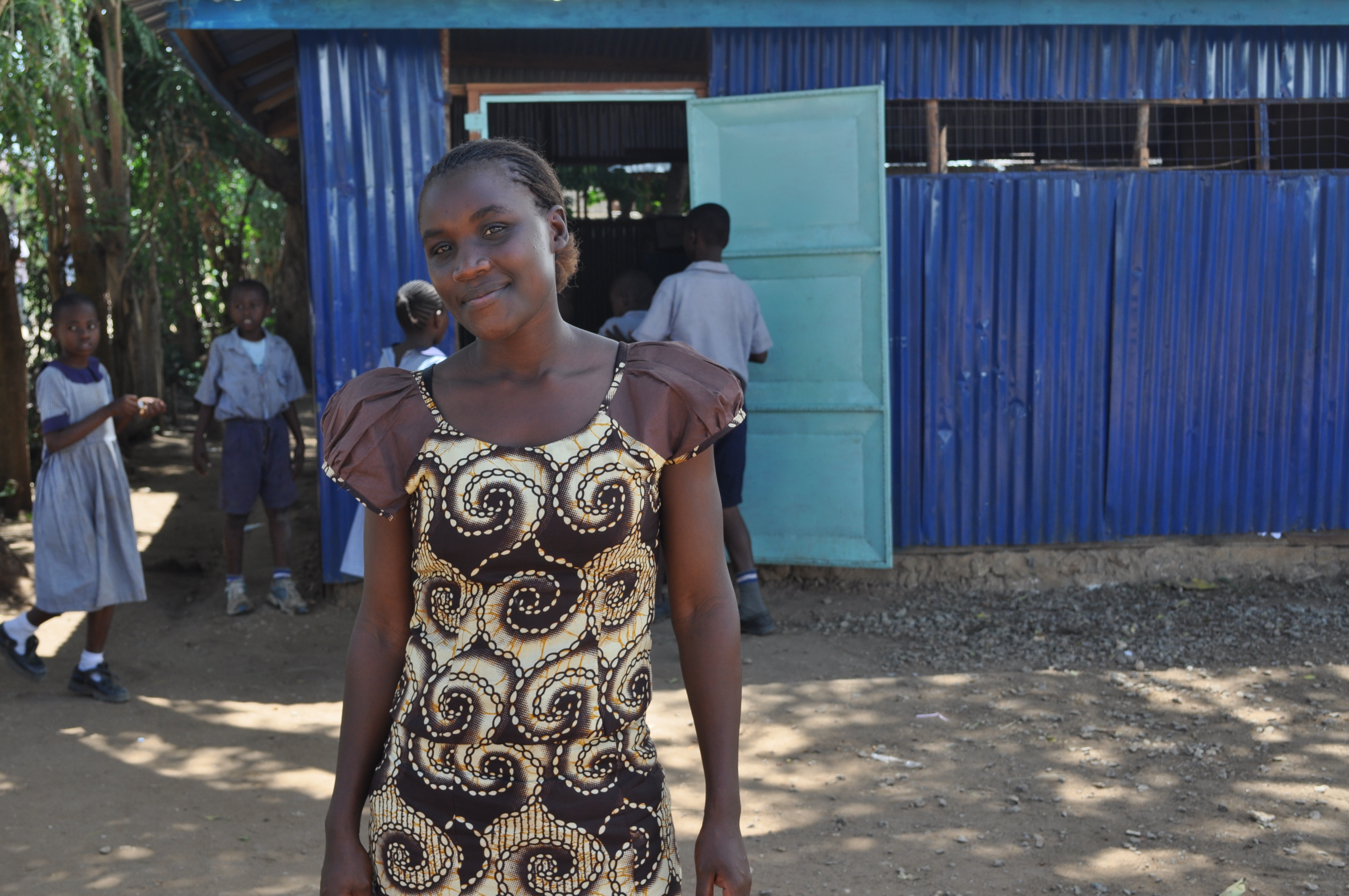 Trustees running an “In-service Training Day” at the end of term: 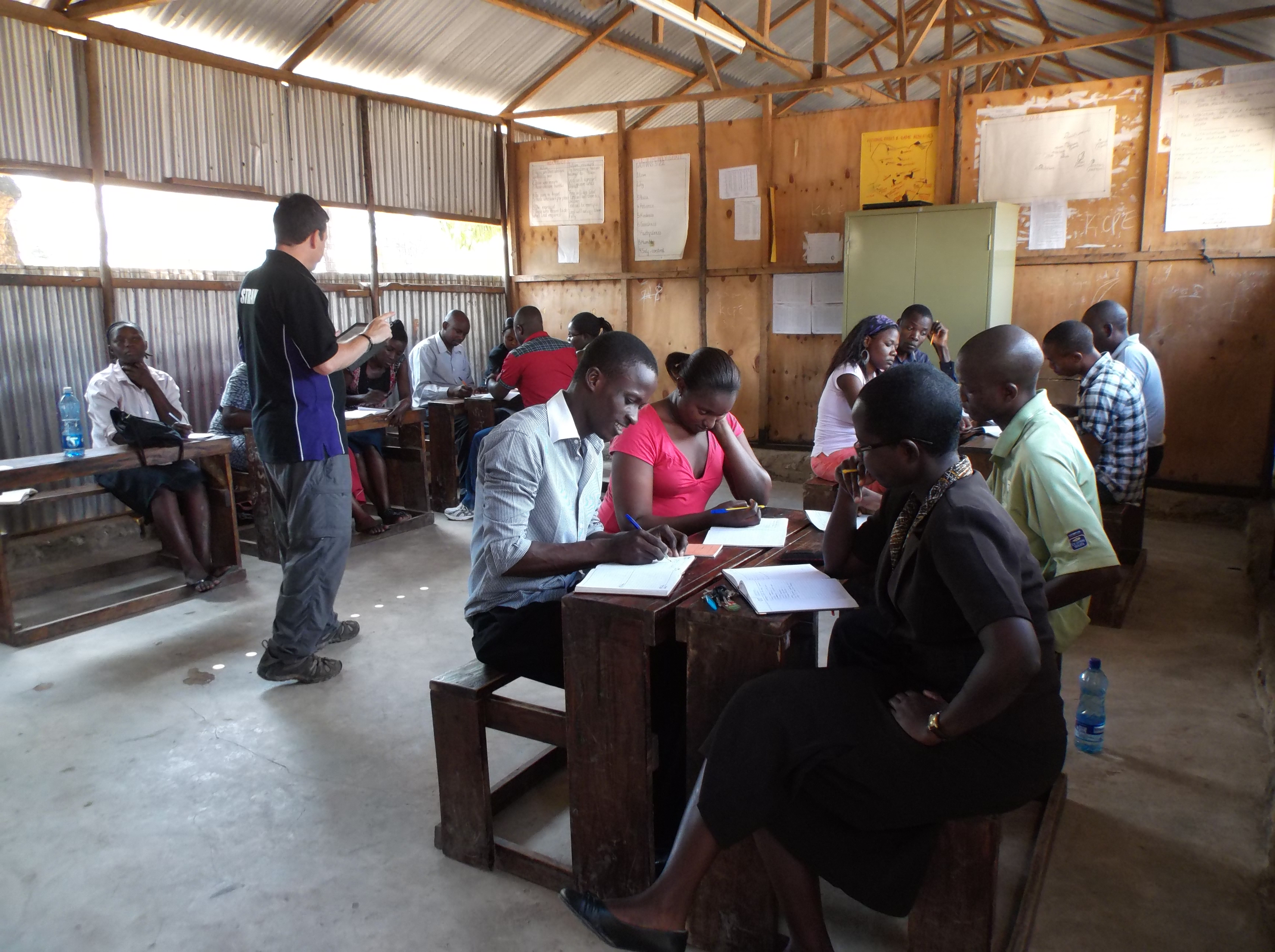 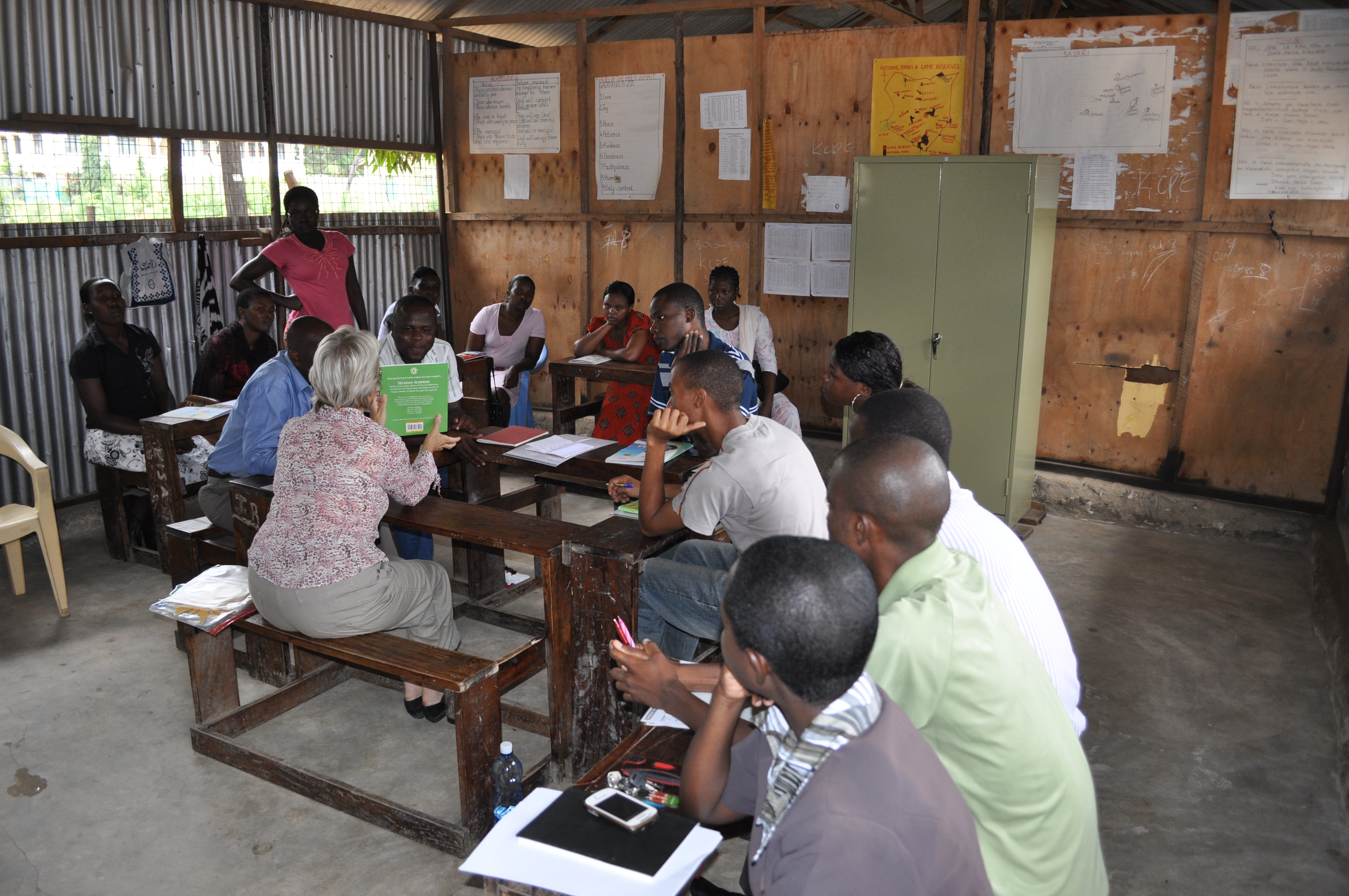 Make a One Off Donation